“First of all, what art is, and what art remains above all, is a game” said Georges Bataille in 1955.

Adrien Fricheteau offers an original reflection on the classical pictorial tradition and a questioning of the role of painting in our contemporary societies, while forming a spontaneous and singular work, bordering on playfulness and impertinence. He works with oil painting, a medium that allows him to explore a technique that represents both a pictural mean for itself and an object with an artistic value, embedded in a particular social context : that of the great Renaissance painting, of Flemish masters, and of the monumental paintings contemplated in museums. By delving into various artistic fields, he questions the image’s status. His work is based on a reflection on Art as a system of representation. Adrien Fricheteau has a spontaneous mindset that allows him to move away from formalism and to deride the myth of the Artist and of the creative genius, in his Self Portrait at 30 years old as an example. He gets his inspiration from the clichés of pre-established genres in the history of painting, and questions the mythology of painting in his relationship to societies. He wants to move away from a painting that “crushes the viewer” and explores various aspects of the artist in order to offer an uninhibited painting, with a “heroically modest” dimension while exploring a sensible relationship to intimacy and interiority.

An essential part of his work is based on the framing of his artworks, from which he fully exploits the potential by offering cycles, as an example. By using singular shaped frames, he grants the work an object dimension. However, by framing common objects, he paradoxically elevates them to the rank of Art.

By staging the Artist in a less glorious position than the one we knew – in Albrecht Dürer self-portraits for instance – he plays with traditional codes of easel painting and delves into different genres of painting at the same time, just like landscape painting. He diverts the position of privileged medium of oil painting in a very specific art history, in particular by reusing photographs from image banks.

Ionesco said in 1962 that “the work of art is not the reflect, the image of the world ; but it is just like the world”, and in the same way, Adrien Fricheteau offers winks to the news in order to always embed his pieces in the present and the everyday life, and to give an underlying reading of his work. This is for example the case in his work La flambée de l’essence – “The gasoline surge” – in which the main subject refers to actual issues, which is accompanied by the thumbnails in the frame directly representing the blaze mentioned in the title. These thumbnails also evoke the predella used by Italian Renaissance painters to go with large sized paintings, and that amplify this process of deconstruction of commonplaces in the history of painting. Nevertheless, the work of Adrien Fricheteau is not only about a conceptual research on the redefinition of art, as he also explores painting as a proper medium. For instance, he appreciates working color, gradients or solid and pure color blocks, and he even plays with depths, games of lights and shadows. While displaying a casual and critical temper towards the great classical painting, the french artist does not hide his inscription in an art history continuity. The blue monochrome background invokes Yves Klein’s work for instance, while the light pinks and greens of some landscapes convoke nabis paintings.

The absurd and singular themes are always rooted in reality and recall the everyday life of each and everyone. Adrien Fricheteau gives ordinary objects – the watch, the thermometer or even the keys – the value of a work of art, making it possible for him to deconstruct the hierarchy of painting’s themes and archetypes that were established since the Renaissance. The thermometer is thus rooted on a background of unearthly blue hills, bathed in a golden lighting that gives it a stripped down but spectacular character.

He also very much appreciates the representation of significant events for our society. The rocket take-off is, for example, indirectly linked to the first step of mankind on the moon in 1969. However, the subjects are always placed in a form of timelessness and of decontextualization, in which no element allows the viewer to identify a moment or a specific action, thus leaving a great place for personal interpretation.

This characteristic humor, this appropriation of banal images participating in a common popular culture and this detached mindset allow Adrien Fricheteau to offer a new and deconstructed vision of the current state of the painting, which goes through a questioning of the traditional codes of Art History. His artworks are uniquely fascinating, and one appreciates to lose oneself in the depth of colors, or even to think about the strange banality of a polo race or a flight of squirrel men. 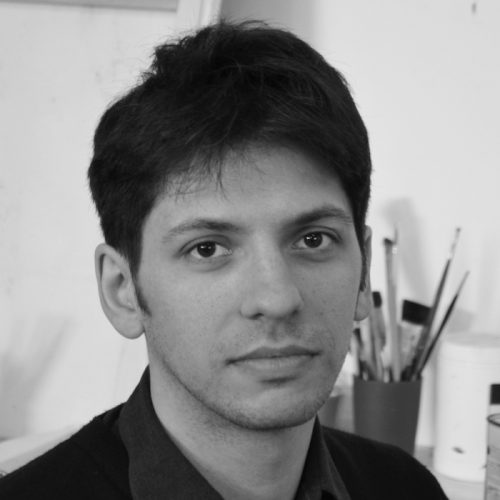