Daniel Arasse used to say “Alberti’s window does not open on the world at all, it is not a detail of the world that we see through this window, it’s the frame from which we can contemplate history”.

The chilean artist Andrea Breinbauer offers ingeniouses mises en abyme of everyday life. Her work forms a reflection on occidental art, and especially on the bidimensional aspect of painting and its limits, that she aims to divert. Graduated in Fine Arts at the Catholic University of Santiago and in scenography at the Art University of Berlin, Andrea Breinbauer combines her two educational trainings in order to produce a work with a significant narrative capacity.

Her painting is like a simulacrum of daily life instants, wherein the flatness of the surface does not prevent an important work on materiality or perspective. The Chilean artist declared that she wanted to rethink the history of painting, from Renaissance to today, and she thus seeks to question the limits of the canvas or the frame. It is not uncommon for some of her paintings to evoke collage. The portrait of a rose pasted on an album page might recall a polaroid printing preciously kept between the pages of a memory album. Andrea Breinbauer recently came back to painting, as she used to create three-dimensional sketches in painted wood. She speaks about a return to tradition and easel painting that allow her to focus more on the narrative content and the pictorial illusion of her work, which are two key aspects for her.

The technical precision that Andrea Breinbauer demonstrates makes it possible for her to use a great variety of touches thanks to a thoughtful brushstroke.

In Inner Window I, the spectators movement is opposed to the hyperrealistic character of the movie scene. The artist has fun with this ambiguity between painting and photography, by representing simple instants drawn from everyday life and with a naturalist touch, in which the choice of a monochromatic color palette emphasizes this idea. The scene chosen is no coincidence : it is a  a view of the filming of the film Persona by Ingmar Bergman, where the director is framing the scene with his hand, creating a humorous scene that leaves space for the viewer to interpret it.

A calm impression thus emanates from it, and the viewer is struck by a spirit both melancholic and intimate. The spectator becomes a viewer, as he finds himself watching a public applying itself to watching something. However, even though the framework of the works is a public place, the scene does not lack intimacy.

The opposition of sharp or diffuse outlines, a color palette ranging from pastel to monochrome but also the work of the pictorial surface and the perspective allow the artist to ground her work in a materiality that aims to activate the spectator’s memories, but also to guide his look through each canvas story. To do so, Andrea Breinbauer draws her inspiration from ordinary themes : an exterior movie projection or even a visit in a museum, and the influence of the aesthetics of cinema, advertising and pop-culture that is reflected in her representations. In Inner Window II, the choice of representing monochrome works subverts our expectations towards Fine Arts museums. The black and white works are in fact photographs from the personal archives of the artist, and the work offers itself like a journey through Andrez Breinbauer’s memories.

Thus, even if her works are presented to us as reflection on the classical pictorial tradition, they are also deeply grounded in our present, and then have the ability to resonate with everyone’s personal memories. 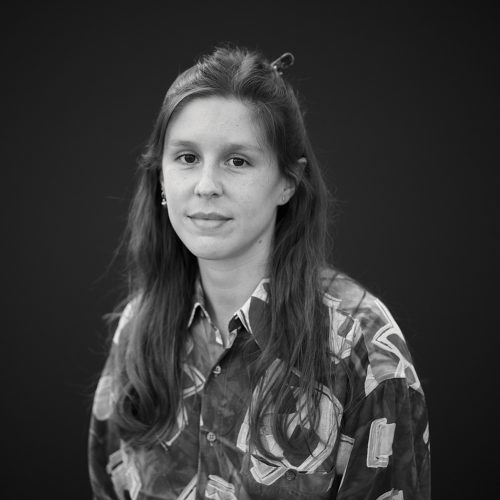