“Time is what is done, and even what makes everything happen” Henri Bergson

The philosopher Henri Bergson defined time in his Essay on the Immediate data of Consciousness as a rational and objective quantification of the passing of seconds and minutes. However, he opposes to it the notion of length that is to him “the true time”. Length is subjective and specific to each, and it depends on “a succession of our state of consciousness”. The italian artist Federico Pietrella chose to use time as a medium. As a matter of fact, his only tool is the date stamp. He said that he chose it “because it was the simplest tool I found to capture time.” But can time really be captured ? Even if it is an exact and measurable notion, it is also a dimension of consciousness that depends on an individual and individual perception. Pietrella thus represents length, or the passing of time and not time itself.

Federico Pietrella’s creative process is simple. He invariably uses a date stamp which is changed every day of work, and he uses it as a paint brush. The subjects are rather classic and allow him to evoke a temporal segment of his own life or of the collective’s. Through elegant compositions, he depicts here an interior scene (in which the window recalls a long pictorial tradition), or there a bucolic landscape. By revisiting these classical themes of painting, he adds another level of reading to his work. While depicting the concept of length, it also illustrates a traditional art history thanks to numerous references. The monochrome and pointillism driven by the tool used evoke the monochrome engravings of the Neo-Impressonist Georges Seurat. His reflection on the course of time also reminds us of conceptual artists like Alighiero Boetti in his Dall’Oggi al Domani. It is also the work of the French artist Roman Opalka, 1965 / 1 – ∞, that this precise and almost obsessional quantification of time evokes. Nonetheless, for the french artist, time was the final point of his work – work that eventually replaced his life – whereas for Federico Pietrella, time is a plastic tool through the date stamp. This very stamp also summons the Stamped Canvas by Louis Cane, major representative of the Supports/Surfaces group in the sixties. By stamping his canvas with the inscription “Louis Cane Artist”, he dedicated himself to question the role of the Artist through the mechanization of the creative process, but it is nevertheless his own signature that made the picture. In a similar way, the repeated printing of dates creates the work . Time gets almost invisible because of its accumulation, and transforms itself into a pattern. The concept of length is also revealed through the meticulousness of the technique that attests of a long and rigorous process. Federico Pietrella works methodically : the stamps repetition – or those of the graphite lines in his drawings – allows him to impose a certain discipline on himself without however making his work repetitive. In fact, the variety of the chosen themes give birth to a rich and diversified production. Besides, all the subjects are selected from the artist’s personal photographs. He picks a subject through his own picture by analyzing pictorial effects such as games of light and shadow, and this method allows him to offer a narratif aspect to his works.

The Italian artist demonstrates an excellent technical mastery of pictorial space which he shapes with sharpness in order to produce virtuosis arrangements. 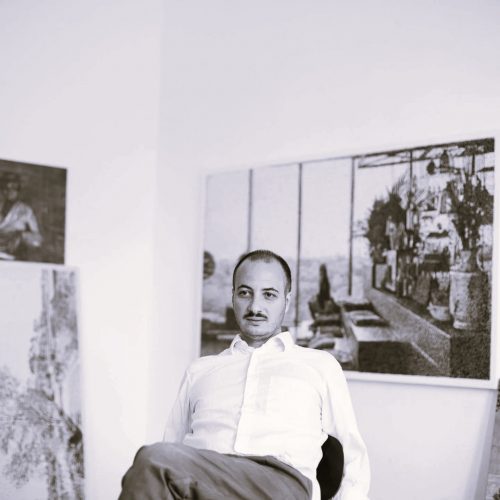