“Hilarious, laughing out loud, the molder distorts, shifts, blends : while Achille has his stomach in his heels, Morpheus lowers his arms and the beautiful Hélène begins to do a handstand… now free to get out of his mold and to manhandle his models, our molder finally becomes sculptor.”

That is the story Marina Mankarios tells us in order to understand her work. The emerging Franco-Egyptian sculptor uses the mold as her main creative tool, which she diverts until we almost completely forget its existence. Molding allows her not only to duplicate and reproduce artworks, but also, paradoxically, a freed creation that plays with this principle of imitation.

Trained at ENSAAMA in design, she produced a master with the adequate title : “molding is not copying”. But what is the use of molding if it is not to copy artworks ? The principle of the mold is usually linked to the serial reproduction of sculptures. However, Marina Mankarios truly has a different interpretation and use of the molding technique. “The molder distorts, shifts, blends” she says. By using the language of ruins, fragments and collage, the artist unsettles our common visual repertoire by calling in our very own imagination.

A molding considered as successful is the own that hides its very essence of a copy. On the contrary, Marina Mankarios plays with the reproducibility by emphasizing the process. In this way, she enjoys the deformation, the discrepancy of the works. The model and the copy are different, but this is the exact goal of the sculptor who integrates mistakes to her work in order to deconstruct the premade concepts of the traditional aesthetic standards.

Her technique can be compared to that of the sculptor rather than the molder’s. She might use a mold first, but then she adds or suppresses plaster to bring her sculpture to life and to make her unique. Virgile used to say “they will draw faces full of life from marble”. By using plaster, a flexible material that allows an ease of figure modeling, Marina Mankarios shapes sensible and animated figures.
In the common imagination, ancient Greco-Roman statuary is often associated with the image of marble fragments, or even to the universe of ruins. The Franco-Egyptian artist plays with these preconceived ideas to reconstruct statues following her own perception, that is to say by asserting the idea of mistake and recomposition. The use of the Greco-Roman aesthetic is no coincidence. The sculptor followed a very classic education, learning drama and cello, but she was also taught techniques of improvisation in both subjects, allowing her to step out of established framework.
She really appreciates XXth century literature, and it is easy to compare her experimental process of collage, offset and deformation with absurd literary texts such as Tardieu’s or Queneau’s.

Greco-Roman sculpture has always been seen as the ideal to be achieved in Art, considered by most as the archetype of Beauty, Perfection and Pureness. However, it is first for its experimental aspect that Marina Mankarios draws her inspiration from this statuary. The notion of copy was indeed developed very early, as early as during the Antiquity, with roman molding of greek bronze as an example, already forming a crucible of experimentation for the sculptors of the time. Greco-Roman statuary also constitutes a familiar aesthetic, commonly appreciated and allowing the emerging sculptor to give a new narrative to pre established archetypes.

“In imitation, the mimicked object, when it is done with cleverness, can get, so to speak, of a new nature and constitute something autonomous” (Memory on the contemplation of artworks, Johann Joachim Winckelmann, 1759). Marina Mankarios applies this principle stated by Winckelmann by exploring the many ways offered by imitation and reproduction, in order to produce new images freed from their models.

Half sunk, a shatter’d visage lies, whose frown
And wrinkled lip and sneer of cold command
Tell that its sculptor well those passions read
Which yet survive, stamp’d on these lifeless things,
The hand that mock’d them and the heart that fed.
Ozymandias, Percy Bysshe Shelley, 1817 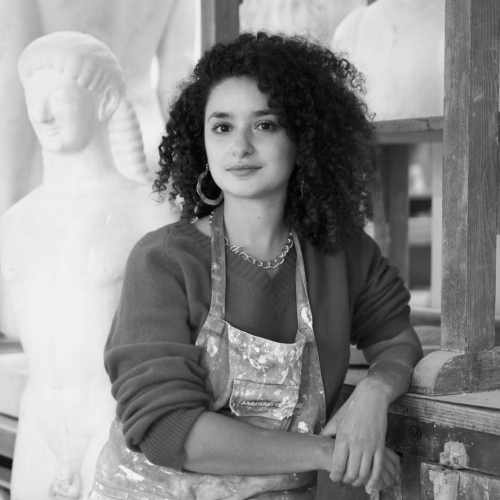